You have got to love powerline. At least after you managed to make it work. It was a total pain in the ass and took me around 3 hours.

At first, I installed vim-powerline and tried to use my normal font for programming, DejaVu Sans Mono.

With the ‘fancy’ option (so you have these nice arrow thingies) I only got utf-8 glyphs. So I needed to patch my font with the fontpatcher provided by vim-powerline. Well, that did work, but the arrows where slightly too big for the statusline, so you could see 1 or 2 pixels overlapping. That annoyed the shit out of me, so I tried patching another font. Didn’t work either.

After, what felt like decades, I decided to use the new powerline and the prepatched fonts.

And then there was the huuuge problem. I couldn’t get the fonts to work at all. Well, to be honest, I was too stupid the first 30 minutes, but after that…man, a total pain in the ass. I downloaded these .ttf with a right-click -> save as. And that was WRONG! You need to click the font and then click on view RAW. I didn’t know that, and it didn’t download the real .ttf fonts. Son of a bitch…

After I figured THAT out, I downloaded the real .ttf fonts (still can’t get the .otf ones to work), and placed them into my ~/.fonts folder. Every font, except meslo and sourcecodepro, had these annoying overlapping pixels. I had every(!) font in the ~/.font directory. So the decision was made: Meslo will be the font of choice, since it’s almost as good as DejaVu Sans Mono. Bigger linespacing and kinda huge dots, but at least no annoying offsite pixels.

I removed every other font, except Meslo, out of the ~/.fonts dir, and then… well…then I don’t know what happened. Meslo didn’t work anymore. The font did, but not the glyphs needed for the 'fancy' option in powerline. Thinking ‘WTF?!’ I removed the entire ~/.fonts dir, and installed the font again. Still…it didn’t work. wat. After installing every other font again, I realized that none of them worked anymore. What the hell, really.

I spend almost an hour trying to figure out what went wrong, but couldn’t find it out. But after I tried another completely different font, Consolas, also patched for powerline, it worked again. And so did the other fonts.

Really, fuck you fonts, you’re as annoying as a printer. Send directly out of the deepest pits of hell, just to make our lifes worse. 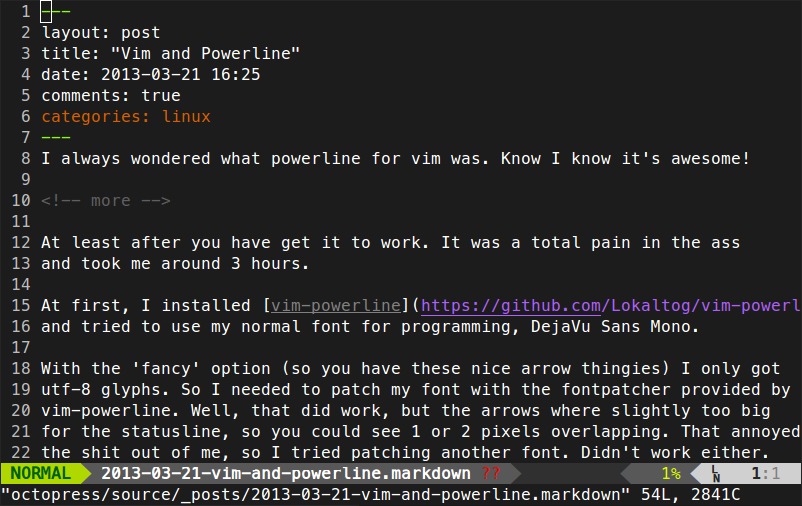